The Power of Thank You: Protecting Your Mind from Injustices 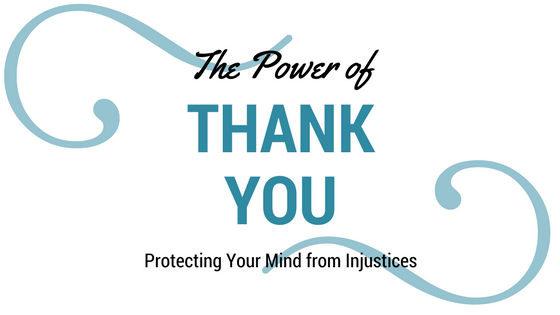 This blog is a continuation of a previous blog titled, “The Power of Thank You: The Way You Perceive Injustices.” In the final episode of the first season of Mind Power, Rachel Krider and her husband, Shane Krider, discuss how and when to acknowledge people in your life who mistreat you and what you need to to to protect yourself.

You can’t be happy if you’re tuned in to what you think the underlying stuff is. That’s just an example of how two people can have the same exact experience, at the same time, and one walks away more beaten up, and the other person just has a great time.

Here’s the thing. Mary may have been on one level trying to dig. I think every comment somebody makes, to some degree there might be a little bit of a dig. But it’s just conversation, and people wouldn’t be interacting with you if they didn’t get value out of it. We can create a story that says there’s this whole underlying thing going on, but it’s not the entire story. In fact, it’s just the tiniest fraction of it, and the point is you don’t give it any life.

It just won’t. It will cease to exist.

It can’t exist until somebody else acknowledges it, and if you refuse to look at things in a negative light, nothing sticks to you. You’re always in a good mood, and you’re still happy. But here’s the thing, things happen, and we take it personally, and we want to protect ourselves.

In one of our programs, we have this little saying. A gift isn’t a gift when it’s given; a gift is a gift when it’s received. You have to take it on. And a lot of us spend our lives tuning into being hypersensitive, and we’re in victim mode.

But you’re equally at cause. Not only does it impact you, but it casts the other person into the role of the bad guy. Rach, have you ever known anybody that regardless your best efforts, just absolutely needed to see you as the bad guy?

You can listen to the full podcast here.

Rachel Krider, a successful personal development life coach and entrepreneur, is the co-host of Born to Prosper’s Mind Power podcast. Along with her husband, Rachel travels the world in luxury to speak to aspiring entrepreneurs at conferences and workshops to inspire them to find their own pathways to success. Rachel Krider is part of The Prosperity of Life Network, a United States-based personal development business with a presence in 52+ countries.