The Power of Thank You: Questioning Relationships in Your Life 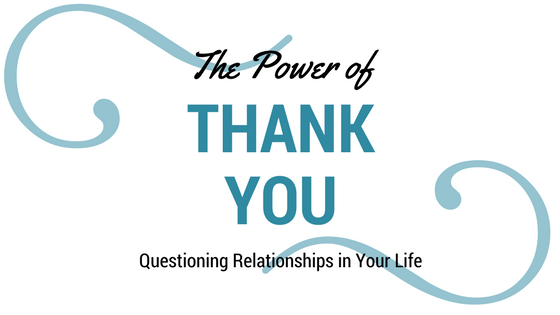 This blog is a continuation of a previous blog titled, “The Power of Thank You: Protecting Your Mind from Injustices” In the final episode of the first season of Mind Power, Rachel Krider and her husband, Shane Krider, identify situations in which you should question your relationship with another individual.

Yeah, only one person sort of comes to mind. I’m sure there are others out there.

I had a person I considered to be a very close friend, but everything was up for debate. From my perception, I’m not in a relationship with somebody unless I’m there the back them up or to be there to be a stand for them. I tend to be the person that defends my friends, and I tend to be the first person to jump up and want to protect them.

I tend to be sensitive, and it causes the same challenges for other people and me because I’m giving it life when I shouldn’t. So for me to become aware that a friend of mine doesn’t feel like I’m there for their best interests, it’s baffling to me when they think I’m trying to be self-serving in the relationship.

From my point of view, it’s unfathomable that somebody can even possibly think that. When that keeps showing up every few months over the course of years, you think “this doesn’t have anything to do with me. This is your crap coming from you.” In that context, I’m like this makes me not want to be around that person, and I could also feel that it would make it easier for me to do the wrong thing. It would be easier for me to play the role that he saw me in.

People become what you treat them as.

Exactly. So if somebody treats you as if you’re the bad guy in their life, that influence makes it easier for you to play that role. It might even make you want to play that role. After all this time, you think “let me show you.” I’m pretty sure I could put on a big demonstration of showing something.

If that could influence me negatively if the opposite were true, wouldn’t that also impact me positively? One of the things that always baffled me about life was that I would have a particular person in my life like I had this one particular boss, and it seemed like I was his whipping boy.

You can listen to the full podcast here.

Rachel Krider, a successful personal development life coach and entrepreneur, is the co-host of Born to Prosper’s Mind Power podcast. Along with her husband, Rachel travels the world in luxury to speak to aspiring entrepreneurs at conferences and workshops to inspire them to find their own pathways to success. Rachel Krider is part of The Prosperity of Life Network, a United States-based personal development business with a presence in 52+ countries.